Every Wednesday at 12:15pm, Mack and Woofy’s Pet Foods team up to feature a new local adoptable pet from one of our amazing island rescues.

This week we got to meet Chase from Raincoast Dog Rescue Society! 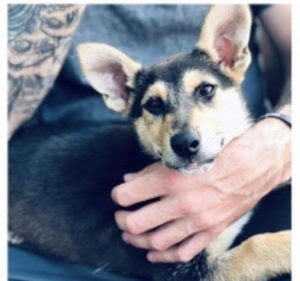 Chase is up for adoption through Raincoast Dog Rescue Society

Chase is an 18 month old mixed breed shepard from Beirut, Lebanon. He was found injured on the street in Beirut and has since received all necessary medical care. Now he’s as much a fun loving puppy as any other dog – just minus the use of his back legs!

Chase is still up for any adventure, whether it’s a hike, play time with dogs or joining you on your next family road trip. His will to never quit just adds to his charm – he will always give 110%.

Chase loves to play with other dogs and his people, but can get nervous around smaller, excitable children. Because of this, Raincoast Dog Rescue is looking for an adopter with a fenced yard, and no small children or cats. Chase LOVES to play with toys, other dogs, and sniff all of the smells! He’s always up for a nice snooze on the couch too! He does have urine incontinence and low control of bowel movements due to his previous injuries – but he will let you know when he needs to go outside and uses a bellyband for inside.

Chase was found on the streets of Beirut, Lebanon after being hit by a car and losing his tail traumatically. He received all necessary treatment and is now up for ANY adventure – even despite losing use of his back legs! All of his medical treatments have been covered, and vets have said that he could regain control of his bladder and nerve endings with physiotherapy and time. Chase is considered far sighted and cross-eyed, but gets around with no issues (This is why a fenced yard is a must!) 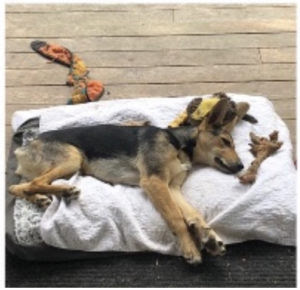 Raincoast Dog Rescue is a non-profit based out of Shirley, BC that was started in 2014 by founder, Jesse Adams. They adopt out dogs all over the country and even internationally! Raincoast Dog Rescue has about 6 animals up for adoption at the time, which can be viewed through RaincoastDogRescue.com.

There are a bunch of ways to help, even if you can’t adopt at this time!

These require applications to be filled out – but Raincoast supplies all the food, crate/kennel, toys, treats, accessories and more for your help!

RDRS runs a service called Raincoast Pet Project with the Salvation Army. They take donations of new or used dog/cat items from the community and distrubite them to low income families or the homeless to ensure their pets are taken care of. You can reach out to Raincoast to arrange a donation.